original title: after eight months of protests in Thailand, where is the end?

tens of thousands of Thai demonstrators broke a government ban and took to the streets for an eighth straight day of anti-government protests on October 22. They held rallies in the capital, Bangkok, demanding the resignation of the government, changes to the constitution and reform of the monarchy.

the Thai government has taken emergency measures in Bangkok to ban gatherings of more than five people in an attempt to prevent mass rallies, but the rallies have continued, the Bangkok post reported. On October 21st Prayuth Chan-ocha, Thailand’s prime minister, said in a televised speech that he would lift the state of emergency in Bangkok if the rallies remained peaceful. In addition, he called on the protesters to let Parliament resolve the dispute and express their grievances through lawmakers. Prayuth’s cabinet had agreed to reopen parliament, which is in recess, to a special session next week to study how to quell the protests.

experts believe that Thailand’s politics in recent years has been in a cycle of unrest, coups and elections. Although the current scale of the protests is large, the prayuth government is still in charge. As to where the protests will go, there is still a battle of political forces. 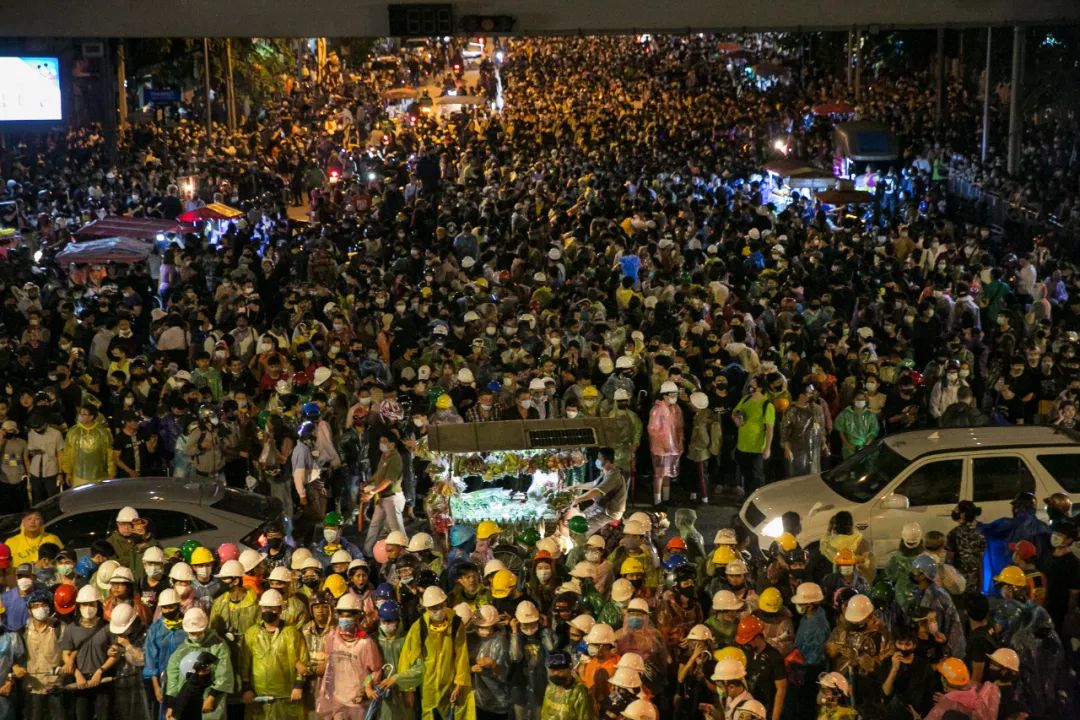 the new future party was suppressed, and the first wave of protests broke out in Thailand
The latest round of protests in Thailand dates back to February.

on February 21, Thailand’s constitutional court ruled that the opposition new future party, quetanana, had illegally lent 191 million baht to the party and ordered its dissolution. The move sparked anti-government protests in Thailand, particularly large ones on campuses.

Thailand returned to military rule in 2014 after the army chief prayuth chan-ocha took power, the BBC reported. In March 2019, Thailand held its first parliamentary election since the coup, with the pro-Prayuth People’s National Power Party becoming the largest party, and Prayuth staying on as prime Minister.

but the new future party, just a year old, has gained political clout as the third-largest party in congress. The New Future party, founded by 40-year-old Thai billionaire Thanatong, has won the support of many young people because of its support for democracy and opposition to military rule. However, in late 2019, The Thai Constitutional Court disqualified Thanatong from parliament for violating electoral laws, sparking small protests. The protests started in February 2020 when the Constitutional Court ordered the dissolution of the New Future Party.

however, this round of protests did not last long. Due to the spread of COVID-19, the Thai government declared a state of emergency in March this year to strictly control social order and the movement of people. Since then, the protests in Thailand have fallen silent.

xu liping, a researcher at the institute of asia-pacific and global strategy of the Chinese academy of social sciences, told the Beijing news that the dissolution of the new future party was the immediate trigger for the protests. Because the constitutional Court’s decision severely hurt the New Future party’s supporters, many young people are very unhappy with Thailand’s current constitutional system and the military junta in power. Although there was no mass protest in March because of the epidemic, their inner motivation has not dissipated.

the second wave of protests was unprecedented in scale, with protesters making three core demands

until mid-july this year, Thailand again erupted in anti-government protests of unprecedented scale. Mr. Koh pointed out that the wave of protests began when the daughter of a Sudanese diplomat who had entered Thailand in July and failed to self-quarantine was confirmed infected with a Novel Coronavirus. The incident sparked public discontent with the government’s response to the epidemic, and, increasingly, with the government’s multifaceted approach.

about 2,500 protesters gathered in Bangkok on July 18 to protest. They made a number of demands, including the resignation of prime minister prayuth chan-ocha and his government, the dissolution of parliament, a new constitution and an end to intimidation under the lese-majeste law.

to August, September, October, the protests gradually spread to the whole country, in addition to the capital Bangkok is still the protest center, Chiang mai province, ubon province and other more than 20 provinces erupted protests. Turnout has also been growing, with more than 10, 000 people attending the Protest in Bangkok on August 16 and tens of thousands attending in mid-September. The protests intensified into October, with demonstrators going to the prime minister’s office to demand Prayuth’s resignation.

on October 15, the prayuth government declared a “serious state of emergency” in Bangkok, banning gatherings of more than five people, but protesters continued to demonstrate despite the ban. Police use water cannon vehicles to disperse protesters in Bangkok on Oct. 16, 2008. Some police officers and demonstrators were injured during skirmishes between protesters and umbrellas. According to al jazeera, a total of 74 protesters have been arrested since October 13, solstice, and 19 of them have been released on bail.

xu liping pointed out that “although prayuth became an elected prime minister after the general election, for the ordinary people, his government is still a continuation of the military government, which triggered protests”.

the outbreak has also been an important factor in catalysing protests. Koh said the outbreak has hit the Thai economy hard, with many young people unemployed, which has greatly increased their dissatisfaction with the government. “Tourism is a pillar industry in Thailand, accounting for about a tenth of Thailand’s GDP. But the epidemic has had a huge impact on tourism, with many young people unable to find work and dissatisfied with the response of the prayuth Government.

as the protests simmered, the protesters’ demands ranged from the removal of the government and changes to the constitution to the reform of the monarchy. Mr. Koh said it was rare in Thailand to publicly criticize the royal family and the king and demand changes in the monarchy. This is also opposed by older people, royalists and especially the older generation, who hold king Rama IX in high esteem and see the monarchy as the lifeblood of Thai national unity.

zhang xuegang, deputy director of southeast Asian and Pacific studies at the China institute of modern international relations, told the Beijing news that in Thailand’s social tradition, people hold the king and the royal family in high regard, and it is rare for them to talk about the royal family openly. However, the new king, Vajiralongkorn, did not hold as much prestige as his father, Rama IX, and some of his actions and royal practices displeased young people who were receptive to new ideas and wanted to reduce the monarchy’s influence over the regime and secular society. To some extent, that is one of the reasons why the protests have been simmering since August.

Thai politics is in a “three-step cycle”, and this protest is unlikely to come to any conclusion

prayuth has expressed a willingness to talk to protesters after months of protests. “To some extent, the government has compromised,” Prayuth said on Monday.

according to nikkei, the prayuth cabinet has agreed to hold a special session of parliament on October 26 solstice 27 to ease the wave of anti-government protests. The upper and lower houses of Parliament will convene in joint session, during which a major debate will be held.

on October 21, prayuth said in a nationally televised address that “I will make my first move to de-escalate the situation. I am now preparing to lift Bangkok’s severe state of emergency and will do so soon as there is no further violence.” He also called on the government and protesters to “step back” to avoid unrest.

xu liping believes that prayuth’s so-called “compromise” may be to change the constitution, because the issue of constitutional amendment has been raised for a long time, but it is difficult to reach a consensus on exactly how to change the constitution, timetable and other issues. “In fact, there is no sign of breaking the impasse. This protest is different from previous ones. Students and young people are making demands that involve a wide range of interests, and it will be very difficult to implement them. According to the rule of the past chaos in Thailand, there was a process of accumulation and eruption, but now it is far from climax “.

for the other two core demands, xu liping believes that it will be very difficult to achieve. On the issue of the resignation of the current government, Prayuth has previously said he would not resign over the protests. On the issue of monarchy reform, although some people think Thailand’s constitutional monarchy does need reform, exactly how to change is still a big problem, because it involves a lot of interest factors, ultimately depends on the game between the parties. “The government needs to protect the monarchy… This is the responsibility of all Thais.

similarly, chang does not believe that the protests in Thailand will bring about social change in the short term. “Social change doesn’t happen overnight. It takes a very long time. However, there is an idealized side to these demands made by the young protesters. How to realize these demands in the future needs to be combined with Thailand’s social reality, and the opinions of other interest groups, such as the royal family, the military, the bureaucratic class and the middle class, should be considered comprehensively to finally find a solution acceptable to all parties. It’s going to take a long conversation and a long run.

conversely, this protest may have a huge impact on Thailand’s society and economy. On the one hand, the epidemic in Thailand is still not over, and large-scale street protests may lead to a rebound of the epidemic and pose a threat to people’s safety, Zhang said. On the other hand, this protest will be a further blow to the Thai economy, which has been deeply affected by the epidemic, and will further affect the recovery and development of the economy. “But more importantly, this protest will further tear Thai society apart, deepening tensions between Thaksinites and anti-Thaksinites, between the military and the electorate, between the royal family and the civilian population, and exacerbating social tensions. How social divisions are bridged in the future will be crucial.

“from the perspective of politics in recent years, Thailand has fallen into a three-stage cycle of turmoil, coup and election, which has done great harm to the political stability and economic development of Thailand,” said xu liping. Thailand is a very important country in Southeast Asia, and its political stability is very important for ASEAN integration and the sustainable development of ASEAN. Therefore, the demonstration in Thailand also needs to be carefully intervened and interfered by external forces.

Protests broke out in Bangkok, Thailand

2020-10-22
Previous Post: Trump is king of the dance at his own TikTok.
Next Post: Russia has granted snowden permanent residency